The Workhorse of the Indian Kitchen: Pressure Cooking Chickpeas and Lentils 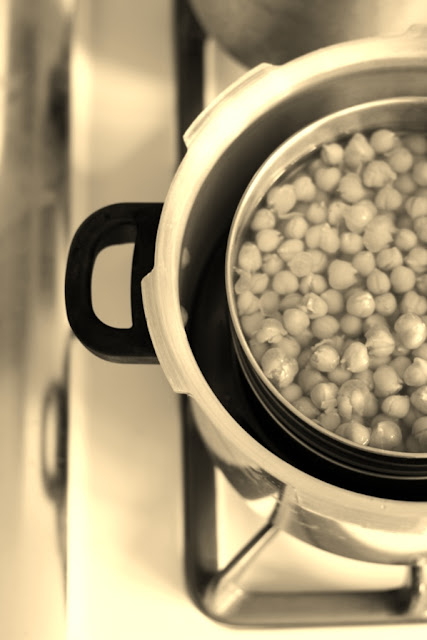 Steam escaping sharply from a pressure cooker, was part of our morning memories. This steam carried with it  the fragrance  and the promise of our meals for the day.
It goes to Cindy's  Black and White Wednesdays # 73 originally created by Susan and hosted this week by Zorra. 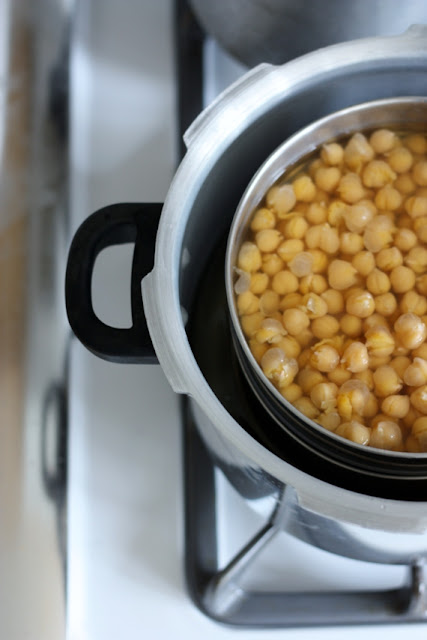 The unsung heroine's of our daily lives toiled within the cramped kitchen's, managing the patriarchal expectations of a 'complete Indian meal'. This 'complete Indian meal' had elastic boundaries, stretching to include festivals and fasts, snacks and guests,  pampered children and fancies, grandchildren and treats, assorted neighbours and sweetmeats, friends and more family. It arranged the heroine's routine, from her first waking moments to when her work ended. But wait, perhaps it also  inordinately occupied our heroine's sleep, dreams and thoughts. This fairly impossible task would have been herculean without the sturdy, Indian pressure cooker. Through this important role, the dependable contraption has moulded itself to our cuisine and social fabric. 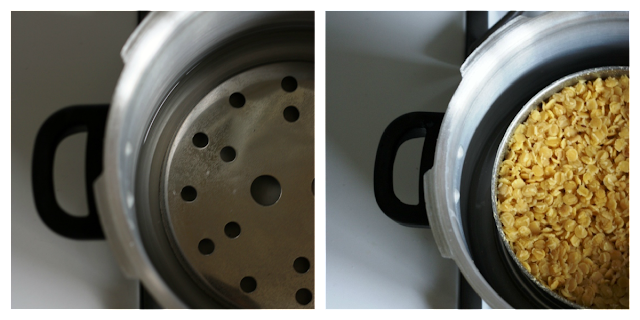 This has been obliquely acknowledged by our patriarchal Indian guardians. In a cliched advertisement which caters to our notions of the ideal Indian woman and her doting husband...  Jo Biwi Se Kare Pyaar / The one who loves his wife... the pressure cooker figures prominently. This was followed by parodies  in popular culture, of an exploding pressure cooker for spouses who did not like their wives  or for brides, who did not bring the expected dowry. The pressure cooker figured prominently among the common incidents, given for a dowry death.  Exploding cooking gas cylinders were the other common one.

However despite this dark side, there is little dispute that the Pressure Cooker has taken Indian cuisine easily ( with most traditional elements intact) into our modern lives! Perhaps in a twisted way,  don't we Indian women efficiently manage our kitchen, churning out made-from-scratch, nutritious food and all cooked in a healthy method to boot? This apart from managing our studies and careers when compared to  our sisters  in the west?  Why have we  not rec'd any kudos for this feat?!! :-D! 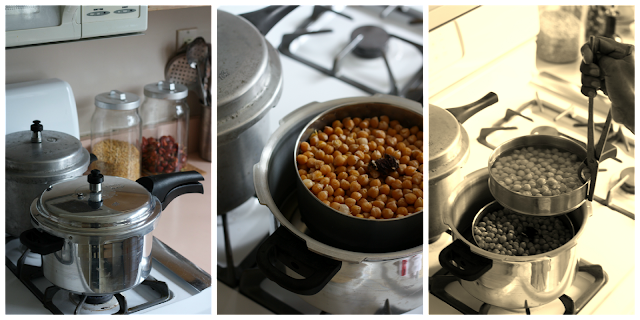 So, it is frustrating and perhaps not particularly surprising ? to see another cliched, western attitude. This time, towards the pressure cooker. These  breathless, concerned writings on how one used a pressure cooker and came out unscathed leaves us wondering whether it was the food or the author who went through the pressure cooker. What is worse is that none of these media outlets have taken the courtesy or the ground  work to talk/ discuss/ research the use of pressure cookers with people who actually use them on a day-today basis.
And yes, my favourite  NPR falls into this too!

Sequencing the process
The pressure cooker has separate steaming vessels, held together with a sturdy wire-frame. The largest one at the bottom with at least two more on the top. On occasion, bemoaning the quality of these wire frames, we efficiently stack these containers without support,  easily removing them with the traditional pakkad or Indian kitchen tongs!

The sequence for the day begins with the lentils-dal and vegetables for the day. The pressure cooker would be rinsed out, the lid cleaned out after cooking the dal and it would go on a second time to cook the rice in time for lunch. Or else, the sequence went like this, early morning:
In a couple of sharp whistles, this would build the foundation of the meal ahead for lunch on time or be packed off into our tiffin boxes! A second routine would commence  for the evening meal. Wait, what about the potatoes for that deep fried, tea-time snack?  It would have been an uphill task for our mother's to make the traditional meals without the help of this one appliance.

Whistling and Roaring
The whistle of the pressure cooker was drowned only by the roar of the mixie/ mixer grinder, grinding the rice and lentils for Idlis and Dosas, accompanying sammanthi's/ chutneys and the masala's both dry and wet.

The pressure cooker worked well for our South Indian breakfast items:
Apart from all that, the pressure cooker allowed an efficient use of the officially rationed,  and many, black market, extra cooking-gas cylinders.

Incidents: In the years since I started cooking  in my own kitchen, I have replaced my first 3 litre aluminium pressure cooker along with a 2 litre aluminium pressure cooker after the bottom started caving out. More than a decade ago, our steel pressure cooker with copper bottom had to be thrown out, when the ManofFewWords left it on the stove-top and  then forgot about it for some hours. The pressure weight was not on and the bottom plate slid out sideways. The safety valve  of one, had to be replaced unexpectedly when daydreaming caused the pressure cooker to be left on the stove. It did not explode, it merely melted into the contents inside; both were thrown out and a new safety valve installed.

This post came through when the Desi Soccer Mom, Jaya decided to  pressure cook the issue. It made a nice Sunday Brunch. :-)
Cooking White Chickpeas in an Indian Pressure Cooker
[Prestige brand used here]

The cooked chickpeas went into a couple of recipes with some saved for Indian Chickpea Salad / Sundal.
We used ours for a favourite,
Chole Without Onions, Garlic and Tomatoes  and another Chole recipe, photo here.
Ingredients

Take 2 Cups of dried chickpeas
Take a bowl that will hold 4 cups or more
Soak the chickpeas in plenty of cold water
Leave overnight or for 8 hours
Rinse thoroughly
Use fresh water.

Position the trivet on the bottom
Pour water until  it cover the trivet
Make sure that the water is half an inch above the trivet.
Put the soaked chickpeas in a steamer container with double the amount of water
Add salt  if you prefer

Close the lid, making sure that it clicks into position and the handles are aligned.

Put on the pressure weight
Turn the heat to medium high.
Let it come to one whistle
Turn the heat down  to simmer/low
Cook for 10 minutes
...Unsure about the chickpeas being cooked?

Turn to medium high,
Let one or two whistles come
Switch off the heat.
Wait until the pressure has come down to open the pressure cooker
Cooked chickpeas are ready for immediate use or for freezing. 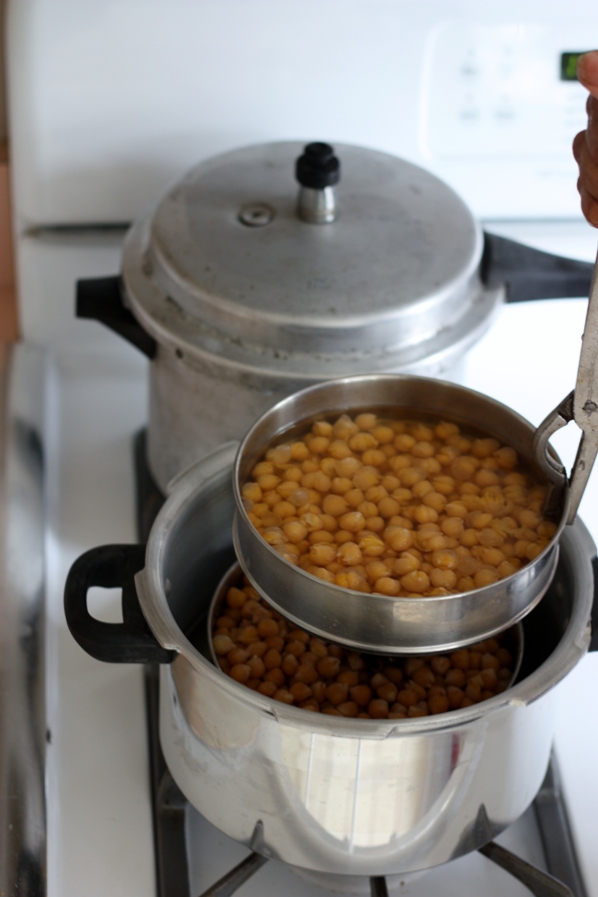 I cooked   white chickpeas in my pressure cooker and it did not blow up in my face!
Posted by Shri at 3:59 PM

Thank you for your valuable feedback!