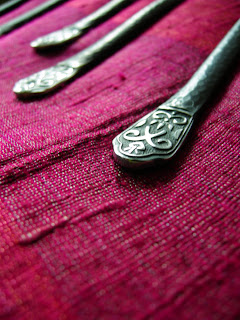 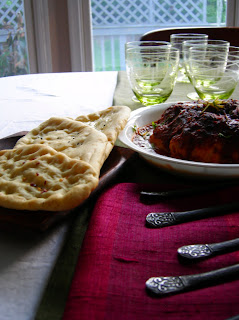 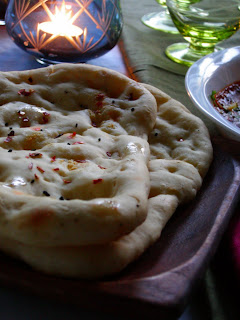 Experimenting for that 'perfect-naan-without-the-tandoor'!
Good but not perfect.... since recipe was noted down, in another post!
Gobi Mussallam 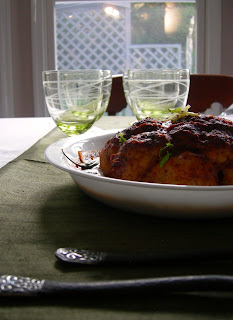 Mussallam recipes, from the Awadh  and Mughal culinary traditions, pertain to  dishes cooked as a whole, especially meat dishes. Cabbage's, Cauliflower and Eggplant also rank among prefered mussallam dishes.
This recipe came about in several ways: did not see a good photograph or technique of the recipe but there are a fair amount of recipes on the internet.  Most of them use the broken-florets method. Cashews, milk, cream and cottage cheese/paneer is used  in the gravy. Garam masala combinations range from the entire spectrum of whole spices to the basic: corainder, cumin, cardamom, cinnamon and cloves with ginger, garlic, onions and tomato. Steaming and then frying in oil, is followed in almost all of them. Serving styles can get very rich with garnishes of rich cream, nuts and edible silver foil.
The best tried and tested  recipes from friends were from Uttar Pradesh and Bihar. One recipe marinates the whole cauliflower with a paste of spices and chickpea flour/besan, deep fries it and then braises it in spiced gravy; the other cuts the cauliflower into large florets and follows the same method.
Among books, without an exhaustive search, one will find Suvir  Saran's. Saran came to mind...particularly  since his comment to the most recent Iron Chef, Garces [still prefer the original Japanese] who used "curry powder'. Saran in his flowing locks, natty black kurta and carefully draped paisley shawl had that knowing South Asian look, "What makes you think that Indians use curry powder in their cuisine?" :-D

His recipe can be found in that elegant book: Suvir Saran, Stephanie Lyness, Indian Home Cooking: A Party Cauliflower: Fresh Introduction to Indian Food (New York: Clarkson Potter Pub., 2004), pp.56-57. Suvir Saran's recipe is made ahead  with the sauce poured over the cauliflower and heated  in the oven before serving. Saran uses canned pureed tomatoes and have found that it adds a different texture and color to the dish. Have used paprika powder to bring color and used the bhunao method for frying fresh tomatoes too.
The recipe posted here was done with a cream and cashew based  sauce like the previous one: whole spices roasted separately, ground and fried with an onion-ginger-garlic paste added with fried tomato paste; red paprika powder was added in lieu of saffron for  the deep rich red colour [personal preference]. Bhunao method was followed. Cream and water were added to make the sauce from the bhuna paste.
Ingredients
1 whole cauliflfower the hard stem removed but still allowing the 'flower' to hold its shape!
1/4 tsp salt
1 1/2  inches of vegetable oil in a wok enough to hold the small cauliflower..
For the Fried paste/bhuna paste and sauce
1 large red onion, chopped
1 inch piece of Ginger chopped
2 tomatoes chopped
1/2 pod of garlic or 4 large cloves
1 tbsp of garam masala,  plus more according to preference
1/2 tsp turmeric powder
2 tsp red paprika powder
1/2 tsp red chilli powder
1/4 cup Ghee/clarified butter or oil to fry
3 tbsps of lightly roasted cashews plus
3-4 tbsps of water to grind it to a smooth paste.
3 tbsps to 1/4 Cup of cream for the sauce
1/2 -3/4 cup of water for sauce
Whole spices for the sauce
1/2 Cup to 3/4 Cup of water
2 cloves
1/2 inch broken cinnamon
1 clove of green cardamom lightly crushed,
1 bay leaf
1/2 tsp of Garam masala [optional]
Fresh finely chopped coriander for garnish
3-4 finger hot thai green chillies for garnish
1-2 tbsps of Ginger slivers for garnish
Method for frying the paste
Heat a heavy bottomed pan on medium high/ high heat.
Puree the onions, ginger, garlic into a smooth paste.
Fry  the paste in oil until the moisture evaporates and oil separates, adding/sprinkling small amounts of either oil/ghee or water to keep the paste from sticking to the bottom of the pan.
Towards the end, add the 1 tbsp of the garam masala*, turmeric powder, red chilli powder, paprika powder and salt.
Fry for a couple of minutes and keep aside. 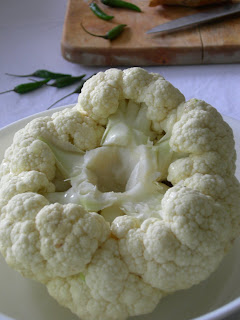 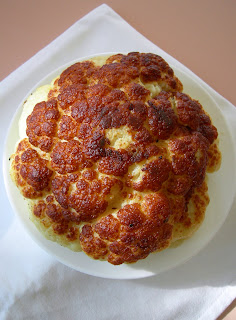 Steaming and Frying the Cauliflower
In vessel with 1 inch of water tow hich 1 tbsp of milk is added, place a steamer plate and steam the cauliflower  for 7-10 minutes. [Saran and others advocate adding a tbsp of milk; this is to keep the creamy color of the cauliflower and if one wishes to serve the cauliflower without marinating it with the sauce.]
Wipe dry with paper towels.
Heat 1 1/2 inch's of oil in a wok and fry the cauliflower, head down until brown, about a couple of minutes.
Remove and let the oil drain.
Sauce
1 1/2 tsp of oil or ghee
the above list of whole spices: cardamom, cinnamon, cloves and bay leaf.
3 tbsps of the spice paste.
Heat the oil/ghee and temper the whole spices
Add the spice paste and mix well
Add 3 tbsps to 1/4 cup cream and water [according to desired consistency] and bring to a gentle simmer.
Checking the salt and season accordingly.
Cook for 5 minutes
Serving
Pre-Heat the oven to 375 F
Marinate the cauliflower with the  fried spice paste,
Using a knife, make slits and spoon in the paste.
Take an oven-proof serving dish,
Keep the marinated cauliflower, stem-side down.
Pour the sauce around the cauliflower.
Bake for15-20 minutes.
Garnish with ginger slivers, fresh coriander and green chillies. 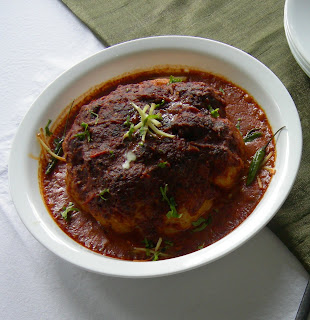 *Garam Masala: The combination and the flavour of the dish is influenced by one's choice of garam masala. In this dish have used a wider range of whole spices. Fresh garam masala [about 3-4 tbsps] for such dishes since our daily tiffin is usually mild South Indian. :-)
Texture of the Cauliflower: With the sauce, one found that the texture of the cauliflower was softer and not 'crispy'. Perhaps if one served it without baking with the sauce, it might be more firm than this version.
Posted by ? at 11:31 PM

Thank you for your valuable feedback!